I had a baby in less than 3 hours.

Here’s how it happened.

Thursday, September 25, 2014 was my grandmother’s 89th birthday, the grandmother after whom Maya Seneva is named. The day before, I’d actually whispered a little prayer humbly asking that the baby be born on the 25th. I also prayed for a volunteer housekeeper to mysteriously show up at my door ready to do all the things for free. Because I hear that God works in mysterious ways.

Anyway, Thursday, September 25th also happened to be the date of high school open house at my job. I stayed after school to tell parents “Hi. I teach your kid…until tomorrow. But I’ll be back in January.”

When parents came in, my classroom-mate, Sydney, and I launched into our simultaneous spiels about our respective curriculum.

Me: Intro to Rhetoric and Composition is a non-fiction writing class. The goal is to learn how rhetoric is used to influence others so as to #1, not get taken advantage of and #2, persuade others to change their thoughts and actions.

Me: Well, ma’am, your son participates in class, but doesn’t do his homework.

Me: He should be writing it down in his agenda. It’s on always on the board.

Me: The best way to do better in this class is to do the work.

This went on for about an hour. (sprinkle in a couple of Braxton Hicks contractions)

My coworker had agreed to drive me home after Open House since I didn’t have a functioning car that day. But she’d been hit with a raging migraine, so ended up driving her car (with her in the passenger seat) home.

I walked in the door, went to give Leila a hug and kiss, and proceeded to make dinner. Tilapia, I think. Or maybe it was chicken tenders. I don’t remember exactly.

Since it was already 5 minutes til 8, I decided to record Scandal so that I could watch TV with Leila before she went to bed. Also, then Charles and I could watch the season premiere of “How To Get Away With Murder”.

He came home just in time. We watched it.

Intriguing show. I want to be a college professor like that (minus the whole manipulation and murder plotting thing)

After the show went off, I started getting ready for bed. I hadn’t really been having any serious pains…just a few minor contractions. So I wasn’t expecting anything at all when I crawled into bed at 10:25 pm. 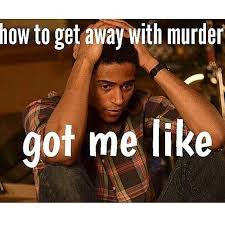